Pink beaches, corals, and plenty of marine wildlife along the way

Bermuda is a British island territory in the North Atlantic Ocean, located 650 miles (1,046 km) off the coast of North Carolina. The island is famous for its pink-sand beaches, like Elbow Beach and Horseshoe Bay Beach. Bermuda is similar to the Caribbean with its turquoise waters, palms, and sandy bays. However, it boasts cooler and more moderate weather thanks to its northern location and subtropical climate. It's an excellent destination for snorkeling, diving, or other water related sports.

When is the best time for a cruise to Bermuda

Bermuda cruise season generally lasts from April to November. April, May, and June are considered to be the best time to travel to Bermuda. It's the driest period of the year, and the temperatures are in the 70s. This moderately warm period is good for golfing, sailing, sunbathing, as well as various watersports.

The Atlantic hurricane season generally runs from June to November, and Bermuda is located in the hurricane belt. It experiences damaging tropical cyclones only once every six to seven years, so summer and early fall are still considered to be a good time to travel to Bermuda. However, temperatures are rather high from July to September. In October and November, it gets cooler, however, rainfall is quite typical, especially in October.

Most Bermuda cruises start in U.S. ports on the East Coast, such as Cape Liberty, New Jersey, Baltimore, Maryland, or Port Canaveral (Orlando), Florida. Cruises usually last 5-9 days. Longer cruises allow more time to enjoy the pristine nature of the island. There are plenty of landmarks to explore, too: the Royal Navy Dockyard, pink beaches along Horseshoe Bay, coral reefs at Tobacco Bay, colonial churches, and other architecture in St. George and Hamilton. Visitors can also hike in the Railway Trail National Park along an abandoned railbed that winds through beautiful landscapes and panoramic views.

Best time to cruise the world

Easter
in Bermuda
Nearby destinations 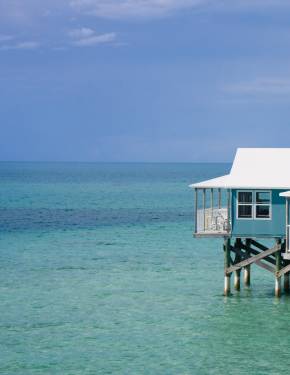