Known for its white cliffs and beaches strewn with rocks, Étretat attracts both tourists and world-famous artists

Étretat, in the Upper Normandy Region, was introduced to the world of art by Claude Monet, one of the greatest impressionists of the 19th century. Both the cliffs of Étretat and the Alabaster Coast (Côte d'Albâtre) inspired many other artists, including Courbet and Boudin. This place has also appeared in Luc Besson’s movie “Lucy,” as the three natural arches and a pointed formation called “the Needle” are really impressive.

The most favorable weather conditions (which is rather unpredictable year round) are between April and October. However, if you wish to avoid crowds, then spring and autumn seasons would be your best bet. And if your target is a swimming vacation, then you must go in the peak summer months and put up with the crowds. You can also go in winter, but this is a gloomy chilly season, and you'll most likely see very little sun.

Don't miss it! Add to your wishlist now and we will remind you in advance

Avenue of the Baobabs
in Madagascar

Lake at Salt Flats or Salar de Uyuni
in Bolivia

The Trift Bridge
in Switzerland

Cruise to Staffa
in Scotland

Stay in the Glass Igloo
in Finland

South of Iceland
in Iceland

Swing at the End of the World
in Ecuador

Watch the Birth of Baby Islands
in Maldives

Jurassic​ Park with Lemurs
in Madagascar

Island in the Sky
in Utah

Cider, Calvados, and Pommeau
in Normandy
Nearby destinations 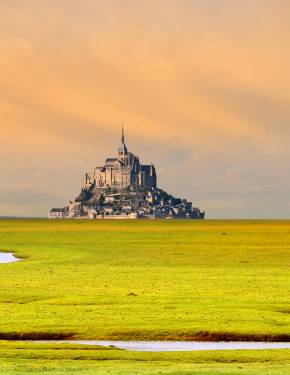