Swing at the End of the World

Do you think swings are only for kids? Then test your courage at the swings next to the Casa del Arbol, hanging from the tree branches on the mountain edge

Great things often appear by accident. That was probably the case with this amusing swing at the mountain's edge in the town of Baños. Its constructor couldn't know, how famous it would become, when he was roping the swings to the plank at Casa del Arbol, meaning a tree house. The swing is placed 2,600 meters above sea level and offers visitors a fantastic view of the Tungurahua Volcano.

In fact, similar tree houses are found all over Ecuador around active and dormant volcanos, and naturally, work as observatory posts that help to predict volcano eruptions, and hence quickly evacuate the nearby residing population. But Casa del Arbol was destined to become known worldwide.

The view from the cliff is truly breathtaking, and the view from the swing must also be a bit dizzy. It's called the Swing at the End of the World, and it actually has all chances to become the end of the world for some careless swinger, for you are going to swing without any safety insurance. It still draws lines of thrill-seekers.

If you also fancy swaying over the abyss, the area is accessible, and the swing is drivable year-round. Just breathe deeply and let the sway carry you away for a while.

Royal Greenhouses of Laeken
in Brussels

Stay in the Glass Igloo
in Finland

Lake at Salt Flats or Salar de Uyuni
in Bolivia

Island in the Sky
in Utah

Avenue of the Baobabs
in Madagascar

The Trift Bridge
in Switzerland

Cruise to Staffa
in Scotland

South of Iceland
in Iceland

Garden of Cosmic Speculation
in Scotland

The Wave (Coyote Buttes)
in Arizona

Cliffs of Moher
in Ireland 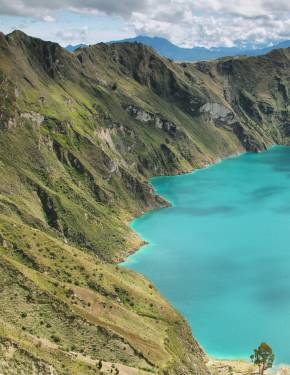