The world's longest carnival will show you what real partying means

See all
See accommodations nearby

Uruguay’s carnival is often compared to the famous Rio de Janeiro festival. But in reality, the Montevideo carnival has numerous benefits over Brazil’s event. Specifically, it is super affordable (tickets will only cost around $10), more family-oriented, and focuses on having fun rather than showcasing your good physical shape. So, basically, the Montevideo carnival is all about having fun.

The preparation starts as early as November: people decorate the streets, set up stages, buy costumes, and rehearse their special-edition shows. But the actual celebration doesn’t begin until the third week of January. Then, it runs for 40 more days and ends in March. In other words, whether you arrive in Uruguay during the last weeks of January or at the beginning of March, you’ll be just in time for the party.

The carnival has three different parts: it kicks off with the Inaugural Parade on Rambla Wilson Avenue, near Parque Rodó amphitheater. It is then followed by the Desfile de Llamadas—a celebration also known as the Parade of the Calls, which goes on for two nights along the traditional route of Carlos Gardel/Isla de Flores streets.

The carnival then wraps up with tablados—night shows with around four to seven carnival groups moving around the city. For tablados, people set up temporary stages for various performances, like comedies, pantomimes, comparsas, live music concerts, parodies, and endless dancing sessions. And the best part is: Montevideo isn’t crowded with tourists, which gives you plenty of space to enjoy all these festivities without being surrounded by thousands of strangers.

Madeira Carnival in Funchal
in Madeira

Fasching, Karneval and Fastnacht
in Germany

Rotterdam Carnival Zomercarnaval
in The Netherlands

Dutch Carnival—Vastelaovend
in The Netherlands

Carnival of Cultures
in Berlin

Semana Santa
in Uruguay
Nearby destinations 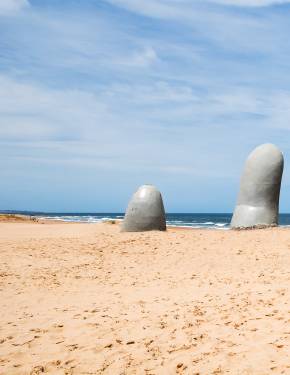