Dance the night away with the vibrant ryhtms of turbo-folk

In Serbia, New Year's Eve is celebrated two times, on December 31 and January 13, according to Gregorian and Julian calendars. Traditional New Year Countdown celebrations at the end of December are the most massive in Belgrade.

If you like to party, ringing in New Year in Belgrade, the ultimate party capital of the Balkans, will be an excellent idea. The beautiful city surely looks amazing during Christmas and New Year holidays. The best-decorated areas include the pedestrian Knez Mihajlova Street and Kalemegdan Park in the old town, providing panoramic views of the Danube and the Sava rivers.

On December 31, many locals gather in the central Republic Square (Trg Republike) to celebrate New Year near the 59-foot (18-m) Christmas Tree. Younger crowds flock to nightclubs and taverns, offering DJ sets, live music, and gourmet food. One of the best ways to ring in New Year in Belgrade is on a party boat. Boats, located on the Sava river, are the epicenter of the city's party scene.

At midnight, there's always an impressive fireworks display in Belgrade, which can be watched from several areas. Nikola Pasic Square, the Obrenovac, and the Mladenovac neighborhoods are among the best locations to see New Year fireworks.

On New Year's Day, the celebration continues in Belgrade. Svetogorska street is transformed into the Street of Open Heart with amazing decorations, a vibrant parade, and lots of activities for children. This is one of the favorite New Year traditions in Belgrade, loved by many families.

New Year's Eve in Dallas and Fort Worth
in Dallas, TX
More experiences in Serbia

EXIT Festival
in Serbia
Nearby destinations 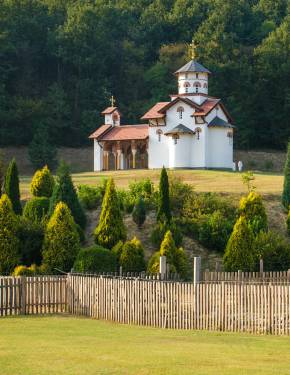