Visit Georgia for the most authentic NYE of your life

If you want to start the New Year somewhere new and exciting, you don't have to look any further. Georgia's New Year's celebrations are famous for being fun, authentic, and memorable. We've compiled a list of the best Georgian things to do for New Year's Eve. Let's get into the ins and outs of it!

If you like to party, you can go to one of Europe's best dance clubs and dance until you drop. Bassiani is in the basement of a soccer stadium, and they usually have events around New Year's Eve. If that doesn't work for you, then don't forget that there are plenty of bars and restaurants around town where you can celebrate, whether you want to do it with locals, ex-pats, or other travelers.

One of the best activities to join in Tbilisi on New Year's is watching the fireworks show. Some cities have fireworks stores, open 24 hours a day, 365 days a year. Whether you're in Tbilisi or a village in Adjara, you'll get a show. In Georgia, it's hard not to witness a NYE fireworks show.

Sulfur baths are one of Georgia's most popular ways to ring in the New Year. Whether you're hungover or just want to unwind before the upcoming year, book a room at one of Tbilisi's sulfur baths and let yourself sweat it out. Abano Street, which means "bath street" in English, is full of baths. You can even get a scrub and massage for extra money.

Georgians celebrate with their friends and family all over the country. If you go to Tbilisi, Georgia's lively capital city, expect nothing less than a lot of fun, delicious food, and local Georgian wine. If you're lucky enough, you'll get to see the Georgian tradition of chichilaki. They are cute little white Christmas tree alternatives that locals give as gifts before burning them down at the end of the New Year's celebrations. So if you get a chance to befriend a local and see what a real Georgian New Year looks like, don't miss this opportunity! Other than that, don't forget to book your accommodation in advance. 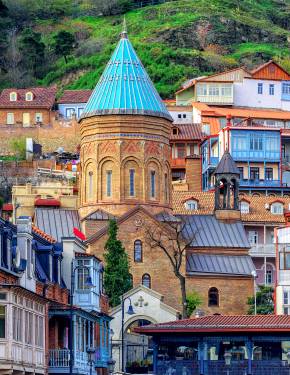