Warsaw is an excellent destination to ring in the New Year thanks to vibrant nightlife and beautiful holiday lights adorning the city center. The holiday, called Sylwester in Poland, is marked by mass festivities on the streets despite the cold weather. To warm up with some hot chocolate or mulled wine, stop by the Barbakan Christmas Market at the Castle Square with the giant Christmas tree and a holiday light show.

The nearby Old Market Square (Rynek Starego Miasta) hosts The Old Town’s ice rink, which is usually open all night on New Year's Eve. You can stop by anytime to enjoy its winter wonderland atmosphere, music, and entertainment.

The most massive New Year's Eve celebration in Warsaw takes place in Defilad Square, near Warsaw’s Palace of Culture and Science, the second tallest building in Poland and the sixth tallest in the EU with a total height of 778 feet (237 m). The festivities typically start with a live music concert and end with a spectacular pyrotechnic display at midnight. Warsaw is famous for its spectacular fireworks, however, in 2020 the city ran a laser show over the facade of the Palace of Culture and Science and in the sky above the city. 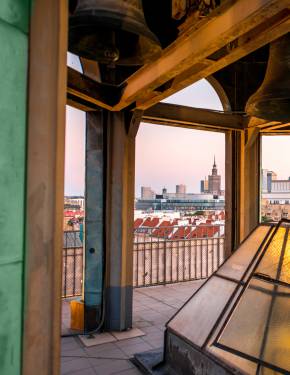