Thanks to the unique location next to the international date line, the Republic of Kiribati sees the sunrise first every day. Likewise, this island nation in the Central Pacific rings in the New Year first in the world. So if you visit one of its 32 atolls for New Year's Eve, you will have a special one-of-a-kind celebration.

The largest Kiribati's island Kiritimati or Christmas Island is likely to hold the most colorful New Year's festivities. These typically run at hotels and traditional meeting houses, scattered across the island. Feasting is an integral part of every local festival, and on the end-year occasion, Kiribati people have a menu containing a roast pig and crayfish, as well as other traditional foods, such as taro, banana galore, and of course, coconuts. Also, the most common beverage is coconut sap, collected from coconut flowers and drunk with water, tea, or alcohol.

The not-so-bright side of living in Kiribati is that these islands are threatened to disappear due to global warming and rising sea water levels. To avoid storm surges prone to flooding homes, lots of people reside in stilt houses well above the water. Some atolls have already descended below the water, and the so-called global warming refugees fled to nearby Fiji or New Zealand. 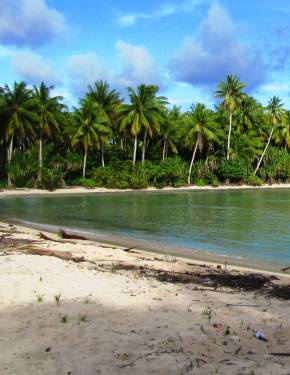